Just a quick one from me to briefly show you how the market has been this past week with the bank holiday. As we saw at Easter, volumes of activity in the market naturally drop off around bank holidays. Firstly, there’s the obvious reason of there being one working day less that week. Secondly though, home moving may drop priority slots due to families being able to spend more time together. 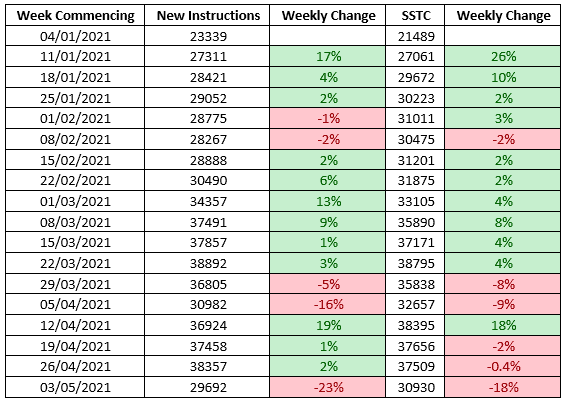 So what we’ve seen with the sales in the past few weeks is a little bit of levelling off in the number of sales becoming agreed, topping out around the 37/38k mark, followed by the drop off from the bank holiday week as we expected. Interestingly, the number of SSTC’s this past week was lower than around the Easter weeks in early April. Also, the number of new instructions coming to the market last week dropped to just below the level of those around Easter. 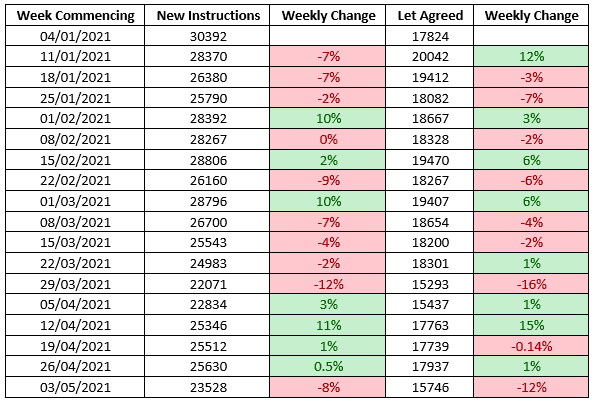 With the rental market, we again saw a drop off on the number of properties coming to the market as well as those becoming Let Agreed around the bank holiday – as we’d expect. The percentage drop isn’t as severe as the sales market.

I would expect to see both markets pick up again this week and see volumes similar to those of a couple of weeks back. But let’s keep an eye on May and how another double bank holiday Month turns out. Don’t forget that in April, the market sold 57% more properties than in April 2019. So even with these slight drops recently, the market is still very buoyant.