I’ve decided to delve a little deeper into some of the other numbers in the housing market currently, rather than just new listings and sales being agreed. This week, I’ve also taken a look at the number of properties that are being withdrawn from the market without a sale being agreed and also those transactions that have fallen through.
But let’s start off with the new instructions and SSTC’s:

With New Instructions, last week was the first week since the turn of the year where there’s been more properties listed to the market than in the same week in 2020. This is most likely to be down to a few of the factors I listed last week – stamp duty holiday extension and the historical seasonality for example. 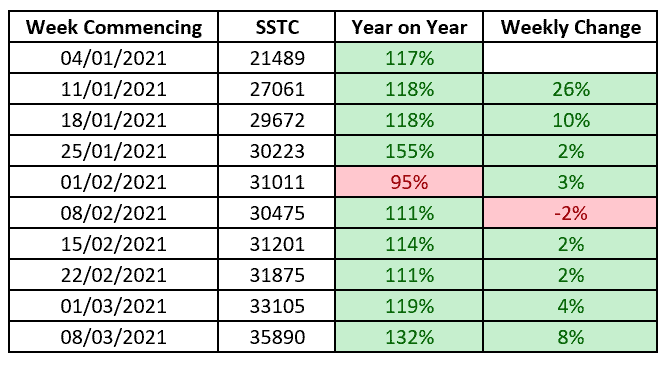 Again, with the SSTC’s, you can see a large increase in the year on year volumes over the past week, as well as continued week on week growth also.

Now let’s take a look as the number of Withdrawn properties for the first 2 months of 2021. A withdrawn property, just to be clear, is one that is not listed as SSTC and has been taken off from For Sale: 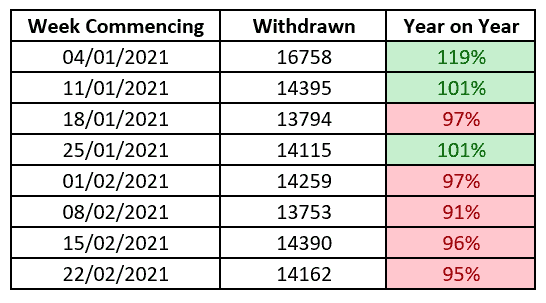 The if we look at the number of sales that have been falling through:

We can see clearly here that there has been an average of 45% more transactions falling through in the opening weeks of 2021, compared to 2020. Now, this could well be because there’s been far more sales being agreed in late 2020 and early 2021, so the ratios of sales starting to sales terminating are roughly the same. It could well have also been impacted by the pending end of the stamp duty holiday – which was finally extended at the beginning of March in parts of the UK. It could also be partly down to the time it takes from agreeing a sale to actually completing – up to 22 weeks, over 5 months!