We have taken a look in depth at the London market and specifically zoned in on the performance of houses versus flats. As I’m sure you are all aware of the issue relating to the saleability of flats in large blocks relating to the building fire safety issues following Grenfell.

There are some serious issues that are having a major impact on the stability of the London flat market which we have taken some time to evaluate below which will be interesting and concerning for agents operating in London.

Last week, we looked at how demand was outstripping supply pretty much everywhere in the UK aside from London. This week, we turn our attention to looking at the specific issues with flats.

Stabilising the Market for Flats in Large Blocks?

Ever since the terrible tragedy of the Grenfell fire, in which we must not forget that 72 people lost their lives, we have kept an eye on how the market for flats is performing.

Government guidelines introduced in December 2018 meant that the only way to know if a building is safe is to look at a fire safety report conducted after the guidelines were introduced.

To restore confidence in the high-rise residential buildings market, the Royal Institute of Chartered Surveyors developed the EWS1 form which came into use in December 2019. Basically, this meant that any high-rise flat which hadn’t had its’ cladding recently checked and confirmed as completely safe via an EWS1 (external wall safety certificate), was essentially worthless. Without the certificate, mortgage providers have been refusing to lend to anyone who wants to buy potentially dangerous properties which means the current owners are unable to sell.

In the middle of last month, the Government announced that they would pay for residential leaseholders to make their properties safe in buildings higher than 18 meters. But what about properties less than 18 meters in height? And what about the fact that there are nowhere near enough EWS1 assessors to perform the required surveys in a timely fashion?

Today, we look at the impact on demand for flats – with the key finding that as time goes on, the issue gets worse.

But first, as is increasingly the norm, we need to run through a few definitions.

We will continue to define supply by looking at the volume of New Instructions – property coming to the market where the owner of a property has instructed an Estate Agent to advertise their property for sale.

As we will also talk about rental property in this client briefing, supply will also be measured by looking at the volume of New Instructions in the rental market – in this case where a landlord has instructed an Estate Agent to advertise their property for rent.

Houses versus Flats in Residential Sales

As we have done in recent client briefings, we have taken a measure of how “hot” a market is by dividing demand by supply.

The following chart looks at this since 2016, with some shocking findings. 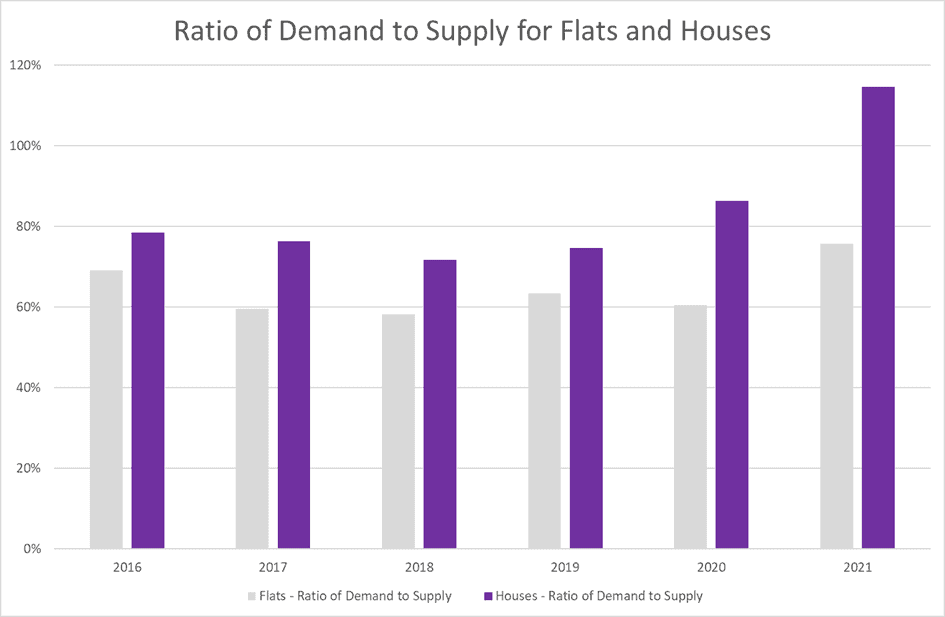 Since the start of 2021, this has increased to slightly ahead of 2016 levels at nearly 80%. In isolation, this presents a positive picture in that roughly 80% of flats last year will have obtained a sale agreed, whereas it was 60% the year before.

However, if we then look at houses to compare against, we see how poorly flats are performing in the current “hot” market. From 2017 to 2019, we observed that roughly 75% of houses on the market had sales agreed on them. But in 2020, this figure changed to 86% and in 2021 thus far, we have experienced demand at 115% of supply with houses.

Houses versus Flats in London in Residential Sales

We already established last week that in London (specifically Inner London) the market dynamics are a polar opposite to the rest of the country right now in that it’s a buyers’ market and not a sellers’ market. However, applying the above chart to focus on the London UK Region only results in this… 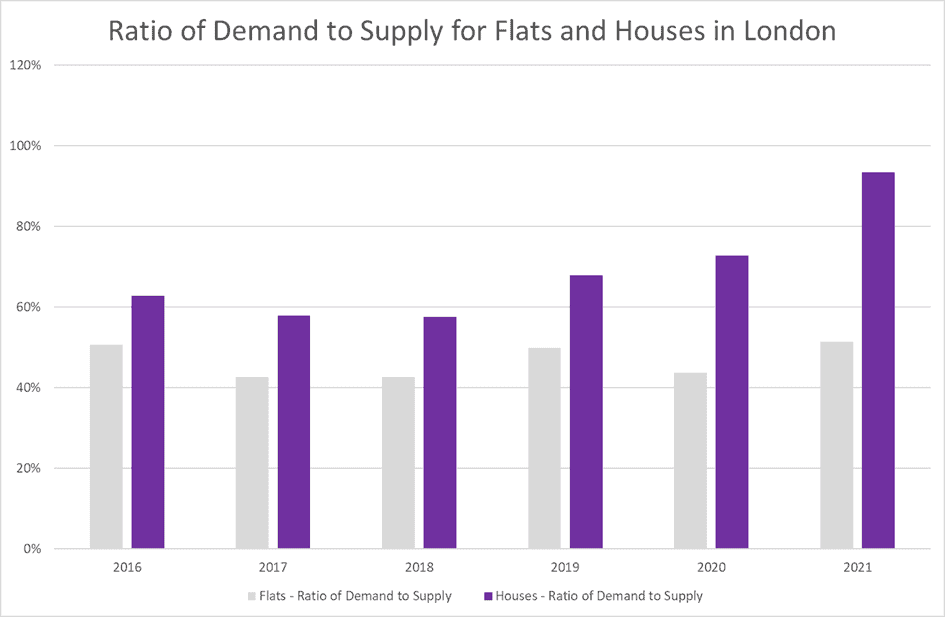 Whilst we have already observed that the demand to supply ratio of houses to flats nationally is now 51% more, in London, this figure rises to 81%.

In short this means that the disparity of houses selling much better than flats in London is greater than nationally.

Houses versus Flats in Residential Lettings

If we cast an eye on the lettings market, we can observe a similar scenario with 2021 thus far exhibiting the ratio of demand to supply for houses outperforming flats nationally by 33%, with a historical norm of around 13%.

Clearly, Grenfell was an utter tragedy which should have never occurred in the 21st century and no one can turn the clock back on this.

What Government must do however is work together to ensure that they resolve the issue for the future, and this includes enabling people struggling to sell flats through no fault of their own. I’m sorry to say that our findings suggest that the misery that many have suffered post Grenfell is still happening now and it has got worse.