So it’s September then and it looks to be another bumper month in terms of sale completions.

In a normal market you would expect to see some fluctuations, but the supply and demand sides tend to balance out. What we are seeing today is bonkers.  If it looks like a bulge and feels like a bulge then it probably is a bulge!  This is likely to be good news in the short term for those associated with home movers but longer term what will be the impact of all this “bring forwards” of volume?  Housing supply will likely pick up, demand is likely to drop off, as the Americans say, “you do the math”.

Recently, we’ve been asked by a conveyancing firm if we had any forward view on what the number of transactions completing in September 2021 is likely to look like, ahead of the final stamp duty holiday deadline in England and Northern Ireland. (Scotland’s Land and Buildings Transaction Tax ended in March and the Land Transaction Tax holiday ended for Wales in June 2021)

The following chart shows the volume of UK residential transactions from April 2005 to July 2021 sourced from Her Majesty’s Revenue and Customs (HMRC): 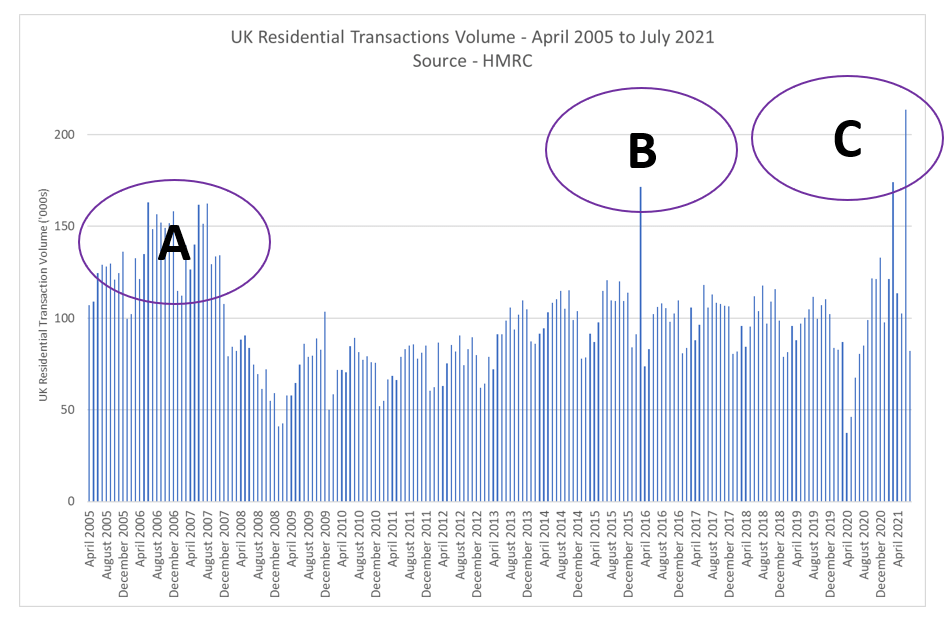 Although the graph covers a wide timeline, there are three interesting facts to point out:

(Note that the last three months of transactions provided by HMRC are “provisional” volumes, but in our experience, these are usually quite accurate aside from the latest month.)

Now, our data currently shows the volume of sales currently progressing in September 2021 is a massive 34% higher now than at the equivalent time at the beginning of June 2021!

However, is this number of transactions even possible in September? We know that many service suppliers to the home movers (such as solicitors, removers, mortgage lenders etc) were at full capacity a few months ago in June 2021 when pushing through the June completions.

As a result, we are, in our view, unlikely to see a 34% increase in transactions in September 2021 compared with June 2021. But September still has the prospect of being higher than June.