Whilst house prices have increased again in June, overall figures suggest that the housing market is still going strong. It’s inevitable that the rising costs of living and possible increased interest rates will impact the market in time, but at present the outlook is optimistic. Halifax has reported an all-time high for UK house prices, but this is the slowest growth rate so far this year which indicates that the market is beginning to cool.

Property supply is starting to improve somewhat, with new instructions creeping upwards in all regions of the UK. Completion figures have stabilised overall, whilst sales agreed have seen another increment in almost every region.

The Current State of the Owner-Occupied Property Market

Currently, there are 197,466 residential properties available for sale and 361,605 properties with sales agreed across the country. There have also been 298,289 completions in the last three months. In the chart below, we have broken down these key stages of the home buying journey – new instructions, sales agreed and completions – by region of the UK. 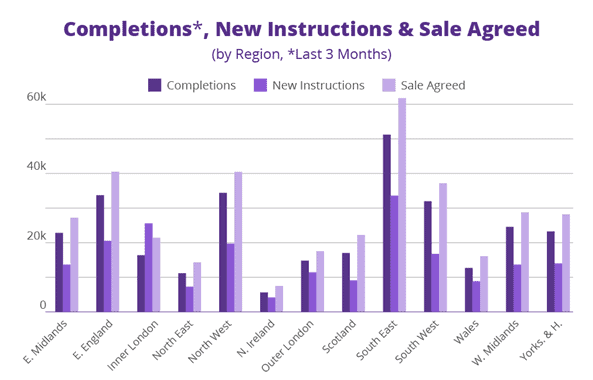 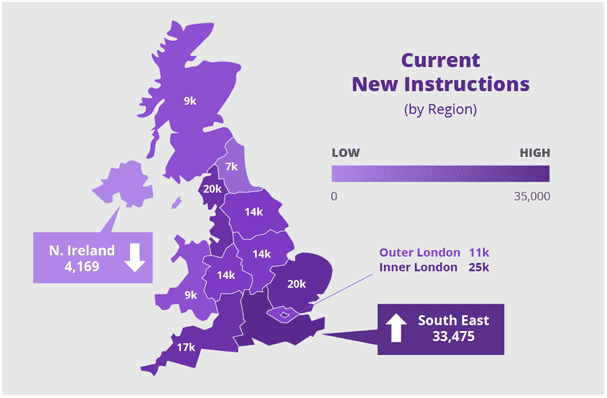 Total new instructions have further increased, rising by 5.03% in comparison with last month’s total which is really positive to see.

As we have seen for a number of months now, the South East continues to have the highest number of houses currently available for sale, followed by Inner London and East England.

Once again, all UK regions have seen a month-on-month uptick in property supply, comparing May and June’s figures. In fact, every region has seen a minimum of a 2% increase in new instructions, which is something we haven’t seen in some time.

Our sales agreed data covers all properties in the UK which are currently at the start of the conveyancing journey and are sold subject to contract. Sale agreed figures can be seen as an indicator of present demand, showing where people are currently in the process of moving to. Currently, there are 361,605 properties across the UK with sales agreed.

The South East has by far the largest number of sales agreed at 61,453. As the largest region in the UK, this is not unexpected. However, this does continue to put pressure on the property supply in the region as new instructions aren’t increasing at the same rate. As we will come to see in the next section, completions in the region have seen a considerable decline, so it will be interesting to follow the progress of the region into next month.

Whilst sales agreed were soaring in Scotland last month, things have levelled off in the region this month. The South West has seen the largest increase in sales agreed at 8.70%, followed by the East of England at 8.53%, Inner London at 7.64% and Wales at 7.56%.

Despite the increase in properties available in Northern Ireland, this is the only UK region that has actually seen a month-on-month decline in sales agreed, decreasing by 2.07% in comparison with May.

Completions in the Last Three Months 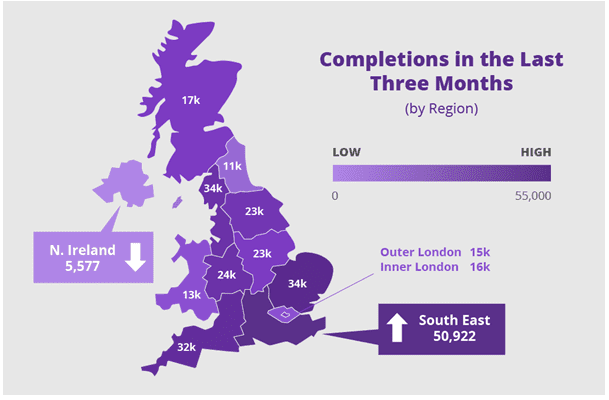 In June, completions have slowed somewhat, showing just 0.10% growth across the UK. Whilst many regions saw a small downturn in completions compared with May’s figures, there was an increase of 4.85% in the North West, 3.89% in the West Midlands and 3.17% in inner London.

The region which has seen the most completions in the last three months is the South East, recording 50,922 despite experiencing the most marked decrease of 3.66% in comparison with last month’s figures. The North West was looking buoyant with a total of 34,290 completions, improving on last month’s total.

Home movers are still a massive opportunity for many businesses, from the retail sector to utilities and insurance. Home movers spend an average of £42,000 on goods and services related to their move in the months before and after moving house.