The Property Market’s Future – A Bright Light at the end of the Tunnel?

In this issue we turn our attention to looking at our Exchange triggers to predict what the number of property transactions were in the first four months of 2020 and how they compared with 2019.  We look at the “V” or “U” debate – i.e. the short sharp shock to the property market (V) versus the more elongated period of depression (U).

We end the issue by looking at some initial early signs of optimism.

First however, a little bit of background.

One of the issues with both is that they are out of date and very often retrospectively revised over long time periods.

At TwentyCi, we have found that over 96% of our exchange triggers within England, Wales and Scotland receive Land Registry (or equivalent) transfer notifications. Even though our Exchanged triggers are derived, they clearly do provide an accurate method of looking at what transaction volumes are for the UK property market even before HMRC and UK HPI numbers are released and way before those numbers are finalised. 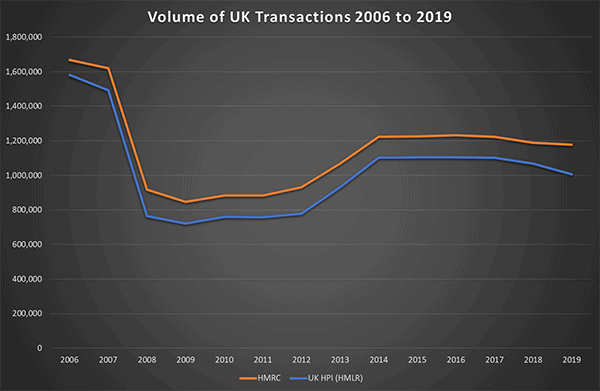 The chart above measures the number of property sales reported by both HMRC and UK HPI (HMLR).

In the heady days of 2006, we saw transaction volumes at around 1.6 million per annum – then came the credit crunch in 2008 which practically halved these volumes.  It is fair to state that the market took a long time to partially return to a flat norm in 2014 and beyond of around 1.1 to 1.2 million depending on which one of the authorities you prefer to monitor.

What is interesting though is what has happened in the last two years on this chart.  In 2018, HMRC reported a 2% drop in the market compared with the prior year and UKHPI reported a 3% drop.

In 2019, differences are larger, with HMRC reporting a 1% drop in the market compared with 2018 and UKHPI reported a 6% drop.

Our thinking on why these diverge is for another day.

Whichever number you believe, we think we can agree that both 2018 and 2019 saw falls in the volume of sales transactions compared with the prior year. 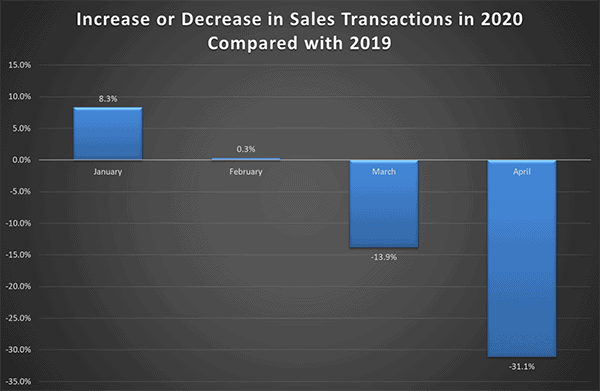 HMRC has numbers for Q1 2020, which suggest a modest increase of 1.3%, but as the numbers from HMRC are provisional and tend to be revised, our view is that neither of the authorities can provide as accurate a view on 2020 to-date as TwentyCi can.

The chart above shows the increase or decrease in the volume of TwentyCi Exchanges by month in 2020 compared like for like with the equivalent month 2019.  There are some startling results.

In January and February 2020, we see an increase in the volume of Exchanges.  We have also looked at the increase in Sales Agreed volumes in this time-frame as well – and the so called “Boris Bounce” was alive and well.

However, in March and April, we saw rapid falls on the prior year.

Let’s just reflect on this for a minute though, in April, a month where the country was on lockdown, housing market Exchanges were only down by 31%.  Not the 50% reduction in the credit crunch of 2008, but 31% during the lockdown period (arguably the worst and most restrictive period – although this remains to be seen).

This supports the views expressed in prior Client Briefings that many of the people who have sales agreed on their properties are simply waiting to move rather than pulling out.

The first positive sign – is a V more likely than a U?

If we are all honest with ourselves, it is practically impossible to predict how many transactions there will be in 2020 given the fact that we are facing the worst health crisis in living memory.  This said, the data we have (measuring by HMRC standards) suggests that the volume of transactions in the first four months of 2020 is around 310,000.

Even if we see the same performance throughout the whole of 2020, seasonally adjusted transaction volumes will still be north of 1 million transfers – or a reduction of about 10% on the prior year.

Further from the “flash” numbers that we see, we are just starting to see some very early positive signs.

Even though it is very dangerous to call these situations too early, in the last week, we have seen properties coming to the market at over 5,000 for the first time since March.  In fact, it was up by 27% compared with the prior week and Sales Agreed were also up by 12% in the week.

We appreciate that it is only a week and volumes are still way down on 2019 norms.

But consumers vote with their feet in our opinion and it is more than encouraging that despite a lockdown scenario, there is confidence enough to place your house on the market or put an offer in on a property.

Here at TwentyCi, we therefore see a “V” dip in the housing market transactions being much more likely rather than a more sustained depression of the market and right now, our numbers appear to bear this out.

Only time will tell if these very early signs of the road to recovery will be further sustained.