The Property Market is Back (But Not Everywhere)! – Client Briefing – Issue 23

We announced that the property market is back. By this we meant that volumes of property coming to the market and sales agreed in the first week of June were both above 2019 norms for the first time since the Covid-19 crisis began.

This got us thinking about regional variations – which areas of the property market have the strongest growth and are there areas of the country where the market is not yet back at all?

It also got us thinking about property price bands. If the market is back, which price bands are performing better than others?

Well, the answers are below.

At the time of writing this (10th June 2020), Scotland’s housing market is scheduled to re-open on the 18th June and both Wales and Northern Ireland have not yet released a date.

The following chart, which shows the volume of properties coming to the market in the first week of June, compared with weekly norms from the whole of 2019 clearly displays the fact that only England’s market is open for business. 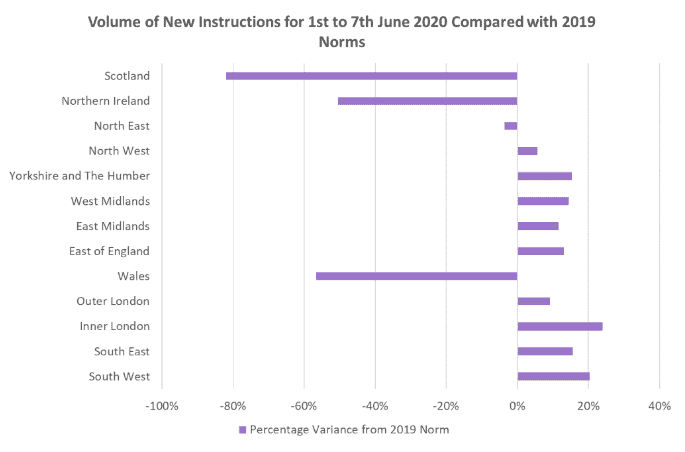 If we turn our attention to England, Inner London is leading the way forward with 24% more property coming to the market in the first week of June than 2019 norms. This is closely followed by the South West at 20%.

The only region in England that performed lower than 2019 norms in the first week of June is the North East and that was only just lower (-4%).

If we turn our attention to volumes of Sales Agreed in the first week of June compared with 2019 norms, shown in the following chart. 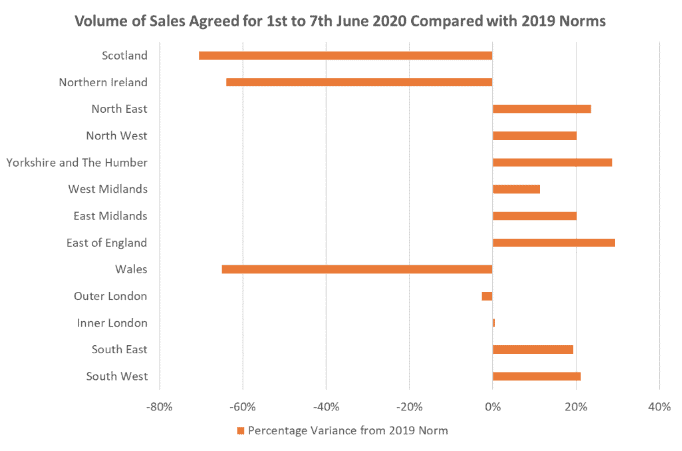 Scotland, Wales and Northern Ireland are performing at similarly poor rates. However, there is more variation with respect to England which suggests that higher sale agreed volumes are being driven from outside of London. The East of England and Yorkshire are the standout performers here, with 29% more sales agreed in the first week of June than the 2019 norm.

In London, sales agreed are performing at the same rate as 2019.

There is a perfect relationship between property price bands and the volume of properties coming to the market. A comparison the first week of June with weekly norms from the whole of 2019 is shown in the chart below. 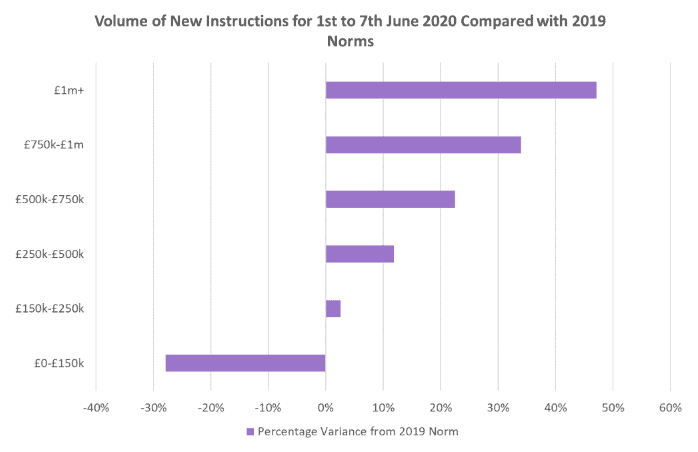 All price bands are currently experiencing volumes higher than 2019 norms with the exception being the lowest price bracket (£0-£150k), where volumes of property coming to the market is 28% lower. 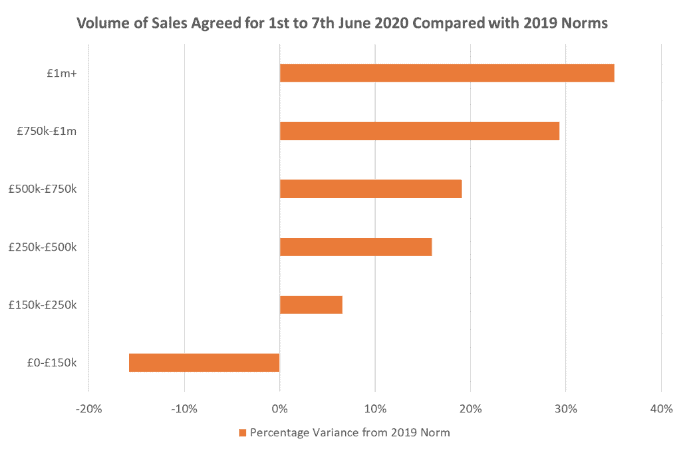 Here, we see a similar picture to New Instructions in that performance of Sales Agreed is better at higher priced levels, but the growth is smaller than with New Instructions at the top end.

The lowest price bracket (£0-£150k) is again the only band experiencing negative growth, with volumes of sales agreed 16% lower than 2019 norms.

In the £150k-£500k price ranges (which is in fact 65% of the market), it is worth pointing out that growth in Sales Agreed volumes is higher than growth in New Instruction volumes. This certainly reflects the trends experienced prior to lockdown in February and early March.

It is also a very good sign that confidence in property is back and it came back very fast.