If you are reluctant to renovate or redecorate properties – either because of the DIY effort or the disruption – then there is a lot to be said for moving into a new build property. However, the downside of this is that you usually end up paying more than you would with the equivalent purchase of a resale home.

But have you ever wondered how much more?

With rumours abounding that new build properties are typically selling as soon as the plots are released, we thought we’d take a look at the size of the new build price premium by region. Not only does this give our readers an idea of how much more people pay, but also how much more people can potentially afford to spend on doing up their property if they do buy a resale home.

The following chart specifies the median property price that a buyer would pay for a new build and a resale home in the last year. With the line on the secondary axis charting the new build price premium. 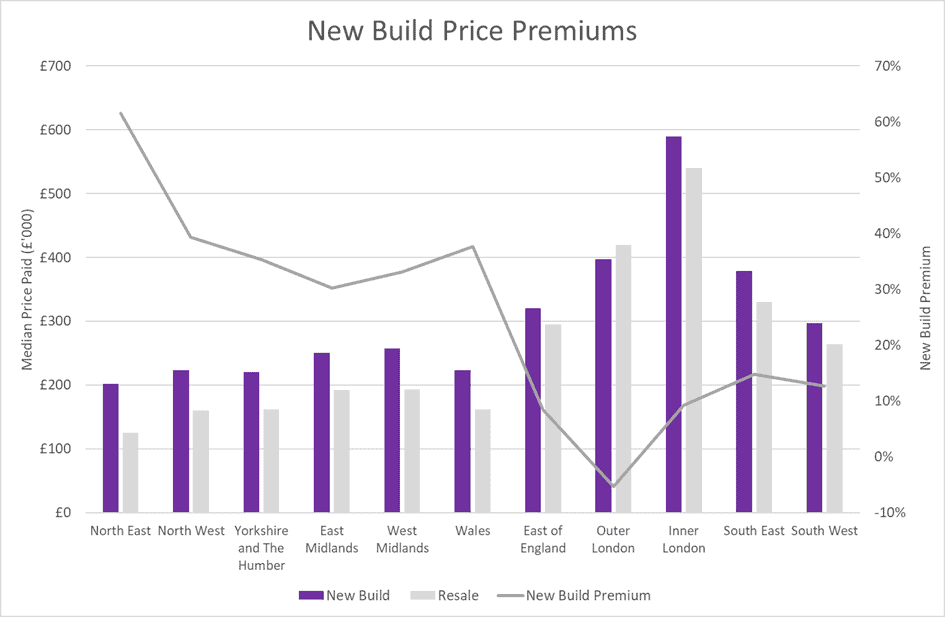 Let’s start with the region of England where you would end up paying the highest percentage premium for a new build property – the North East.

If we just focus on the grey line, with the knowledge that the regions from left to right are broadly North to South, we can observe that the new build premiums are much higher in the North, the Midlands and Wales than they are in the South of the country.

Further, the only place in England that buyers (on average) would pay less for a new build than a resale property is Outer London. In fact, in London as a whole, the new build premium is relatively low.

In the South, new build premiums are about 14%.

So, what does this all mean? Well, the facts are that the new build premium across the whole of England and Wales is around 25%.

On average, which is of course significantly skewed by London prices, people buy a new build for £316k versus an equivalent resale property for £253k. So, a saving of £63k to buy a resale property.

For the vast majority of people, a £63k saving buys a significant number of home improvements. If you are selling kitchens, bathrooms, furniture, electricals or soft furnishings; the resale market provides a fertile “hunting ground” to acquire new customers.