There is no doubt that 2020 was a disastrous year for the automotive industry, as it was for many sectors in the UK economy.

New car registrations in 2020 fell by over 29% from the prior year according to the Society of Motor Manufacturers. The popular car review site Autocar, when commenting on this information, highlighted that the decline in the volume of car registrations experienced in 2020 was the largest in any year since 1943.

The new car registration decline continued into this year, where we found that January 2021 was worse than the prior year by nearly 40%. 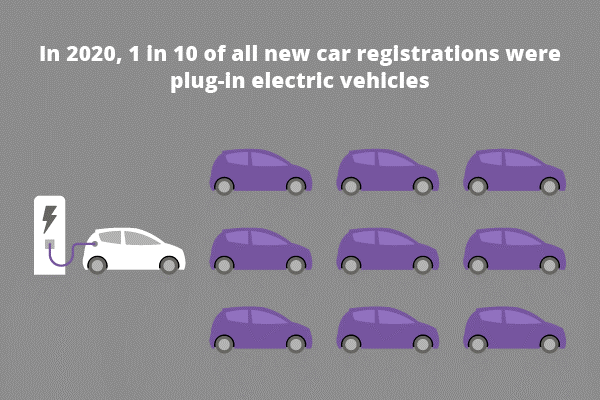 In March of this year, the Government confirmed that they will ban the sales of petrol and diesel vehicles by 2030. So, there are 10 years left to move the needle from 10.7% electric to 100% – that is some challenge in such a short space of time!

One of the things people who are potential buyers of electric vehicles are concerned about is the lack of charging points. According to Zap-Map.com, there are now nearly 24,000 charging devices in the UK. As a side note, this compares with around 9,000 petrol stations, so you’d think that 24,000 might be enough, until you take into account the time spent charging versus filling, in that everyone who fills their car with petrol does not take an hour to do so (based on a fast charge).

Clearly therefore, owning an electric car in most cases probably still requires you to charge at home. And this requires a garage, or access to a driveway at the very least.

Here at TwentyCi, we are privileged to have a database which we call DOMUS. DOMUS provides the DNA of a dwelling, delivering the attributes and characteristics specific to any one of the 31 million residential properties in the UK.

Whilst DOMUS contains hundreds of fields of information, we thought today, we would take a look at our data to assess what percentage of the UK’s properties by region have garages and driveways.

This is shown in the following chart… 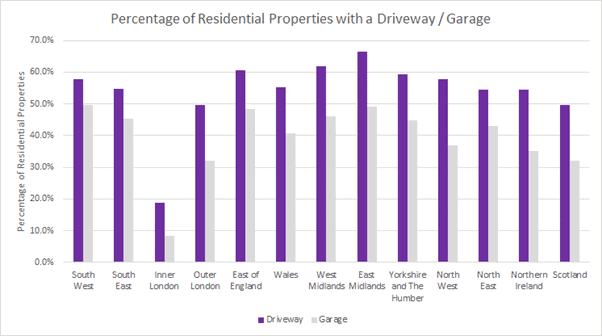 Note that the chart runs south to north from left to right.

The chart above breaks this down by UK Region (where we have split out Inner London from Outer London). The most striking feature of the chart is the exceptionally low percentage of residential properties in Inner London with a garage (8.5%) and a driveway (18.9%). This is maybe pointing out the obvious, but it does mean that the Government will need to tackle this problem this decade prior to banning the sale of petrol and diesel cars.

Other than this, the rest of the regions are on or near the average of 55% when looking at driveways, although there is more variation in the amount that have garages.

But if you own a property and are considering installing an electric vehicle charging point on it, you should do this without hesitation.

Our research shows that properties with electric vehicle charging points take less time to sell and moreover sell for more money than comparable properties without them. 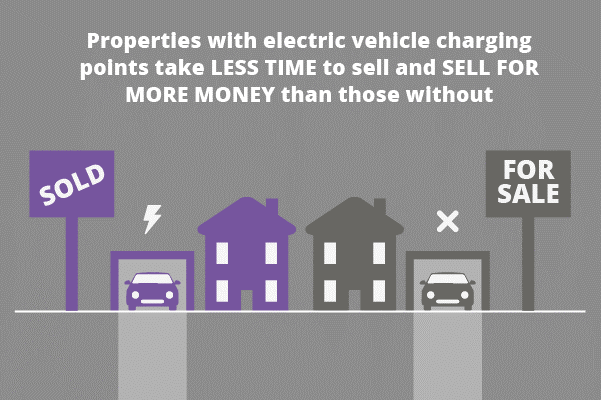