Before we continue, we will have to introduce some terminology.  These are all phrases that we have used before now, but for the avoidance of doubt (or if you are a new reader), the following phrases have the following meanings:

With that out of the way, let’s get on with the business of imparting insights.

To give you some idea of how exceptional this is, the equivalent value across the whole of the last “normal” year of 2019 was 42 days.

In theory, this means I can instruct an estate agent today (October 2021) and sell my property by mid-October.

We can now see those visions of Santa turning into Scrooge before our very eyes – “come back Santa, please”.

Again, to give you some idea of how exceptional this is, the equivalent value across the whole of the last “normal” year of 2019 was 94 days or 13.4 weeks.

Now there may well be a very small number of people who list their property for sale today with an Estate Agent and move into their new property prior to Christmas, it is certain that it’s a dream for the vast majority of the people who want to move.

Adding these two numbers together to get a time to move would suggest that on average, it would take 20.3 weeks.  Which means that if I instructed an estate agent on 1st October 2021, and if I’m ranked as average, I will be moving in on 20th February 2022.

Time to Move by UK Region

The next interesting question is how long it will take you to move in each of the UK regions, which is displayed in the following chart: 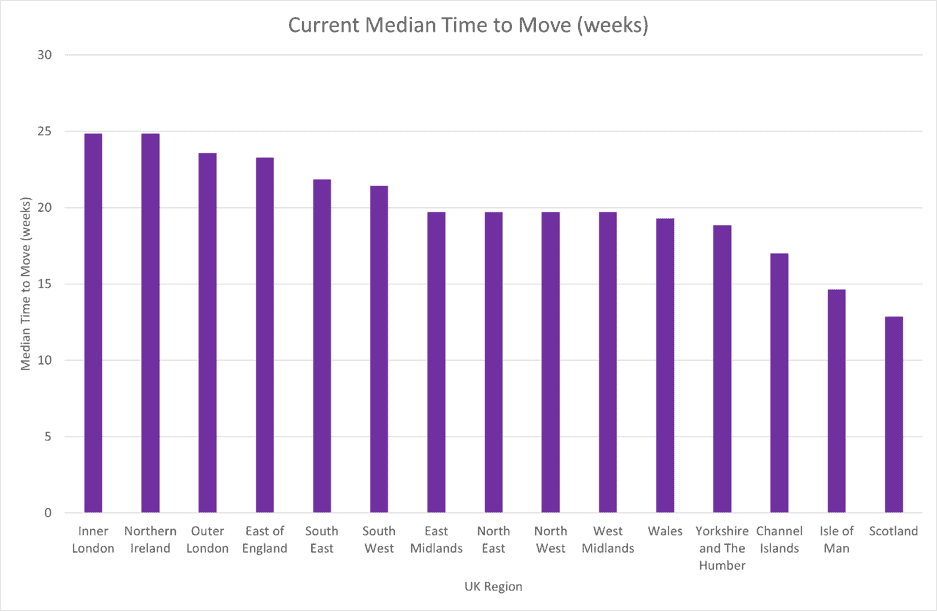 Here we see that Inner London and Northern Ireland are the places in the UK where it takes longest to move at around 25 weeks.

For those in the know, you probably already know that Scotland would come out the fastest place to move in the UK because they have a different legal system.

But 13 weeks from the beginning of October means that Santa is alive and well in Scotland, just. Or, at the point this briefing went out, you’ll have just made it for Hogmanay.

He’s turned into Scrooge everywhere else in the UK.