At the time of writing this (10th June 2020), the housing market in England opened up on 13th May, Scotland’s housing market is scheduled to re-open on the 18th June and both Wales and Northern Ireland have not yet released a date. The below chart looks at the number of newly listed For Sale properties last week, compared to the average week in 2019 (the 2019 Norm). The norms were created by looking at the whole of 2019 and calculating the average weekly volumes throughout the year. 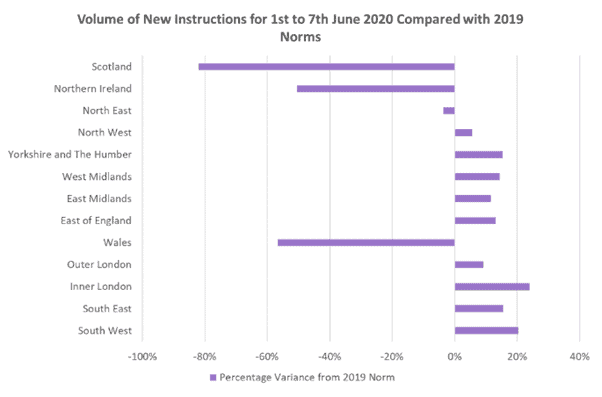 As you can see, the market in the English regions is open for business and generally seeing more activity than the norm of 2019, with only the North East slightly behind the 2019 average. Scotland is currently operating at -82% of the 2019 norm, while Wales is at -57% and Northern Ireland at 50%. Inner London at 24% more properties coming to the market, followed by the South West, at 20% up, lead the way through England.

Then, when we take a look at the volume of Sales being agreed last week compared to the norms of 2019, we see the below: 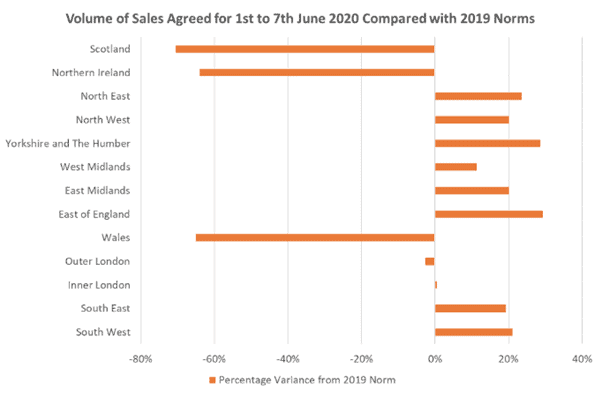 As I’m sure you would expect, with the restrictions still in place in Scotland, Wales and Northern Ireland, we see that their house markets are all struggling still. However, you’ll notice that even though volumes are around the 2019 norm, London is struggling in terms of sales when compared to regions outside of the capital, albeit still at around 100% of the 2019 norm. The East of England and Yorkshire are ahead in terms of sales being agreed, with 29% more sales being agreed last week compared to the 2019 norm.