BAR Members step up to provide aid for Ukraine

All around the country (and further afield) our members have been working with local communities, mobilising to send aid to refugees fleeing the war in Ukraine. Local businesses and the general public have been making donations of essential supplies such as clothing, bedding, food and medical supplies which then need to be safely and speedily transported abroad. Here are just a few examples of how removal companies have been making a contribution.

Somerset based Armishaws Removals have been collecting donations at their depots in Wincanton, Salisbury and Farnborough. Initially they put out an appeal through the local press and via social media and were overwhelmed by the fantastic response. To date they have sent 15 pallets, around 4½ tons of aid, including food, clothes, blankets, toys, sleeping bags, toiletries and medicine. Donations have come from schools, village/church groups, families, individuals, sports clubs, and even a toy company sent some boxes of new toys.

As well as their own Ukraine appeal, Armishaws have helped other local groups to transport aid, along with supporting a particular group of 60 refugees in Zagornik, Poland. Recently they were heartened to receive a moving letter from a Ukrainian woman who’d made the difficult journey to cross into Poland with her 5 year old daughter in which she wrote: “I would like to express my gratitude for the entire indescribable support that we are receiving from you….Your hearts are enormous, thank you very much, each one of you.”

Initially their Polish contacts told them that they were mostly helping women and children, as the majority of men are staying in, or returning to, Ukraine to stand against Russian forces. More recently though, there have been requests for men’s items, such as boots and coats, which are being sent on to the men fighting in Ukraine. Local contacts in Poland, have been updating Armishaws with the type of aid needed as the situation has developed, which means that the company have been able to be responsive and post the latest requests and details on their website and social media. Hundreds of kind donors have responded to their calls for help.

Company founder Lloyd Armishaw said, “The speed at which people have rallied to help has been amazing, it’s not just old unwanted clothes, people are shopping for items, companies have collected money from staff to buy food and toiletries, some donators have travelled considerable distances to our depots to deliver boxes of aid. We’re thankful to every one of them.” 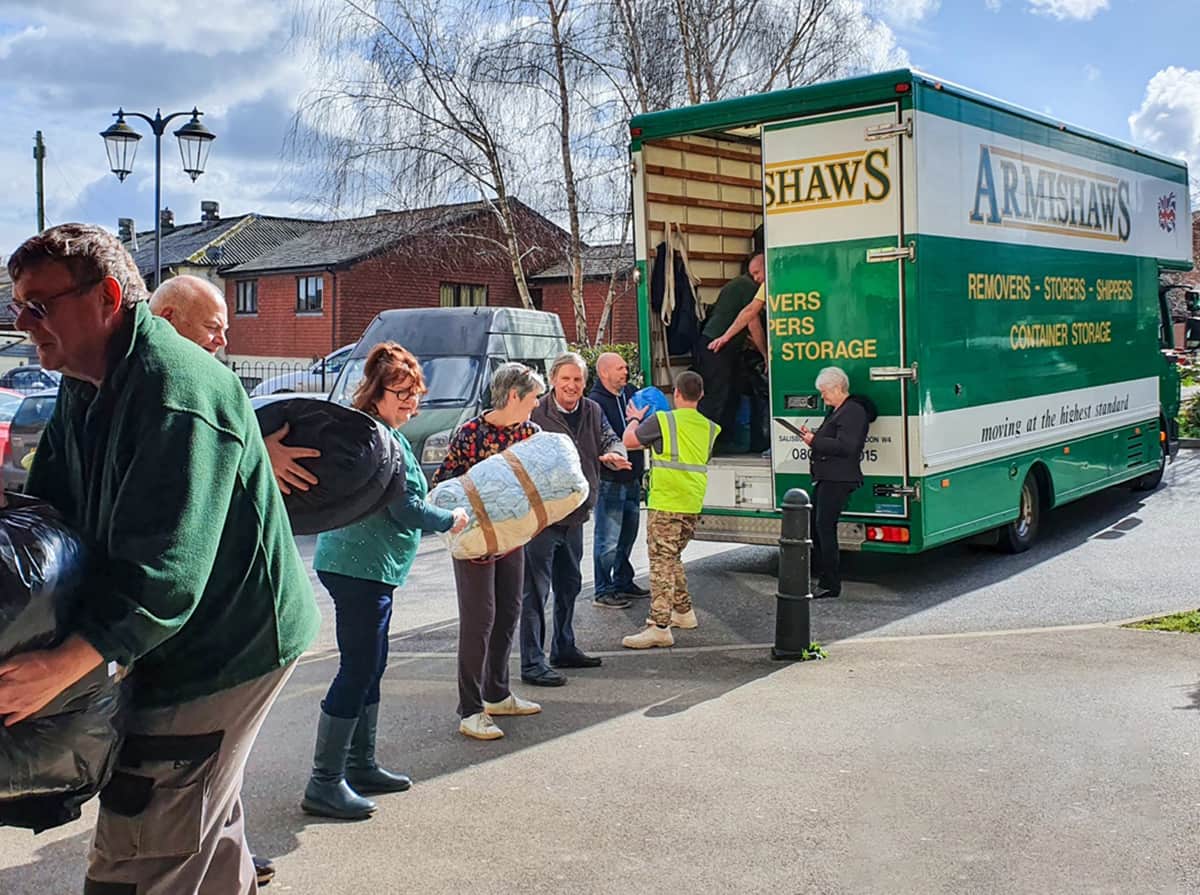 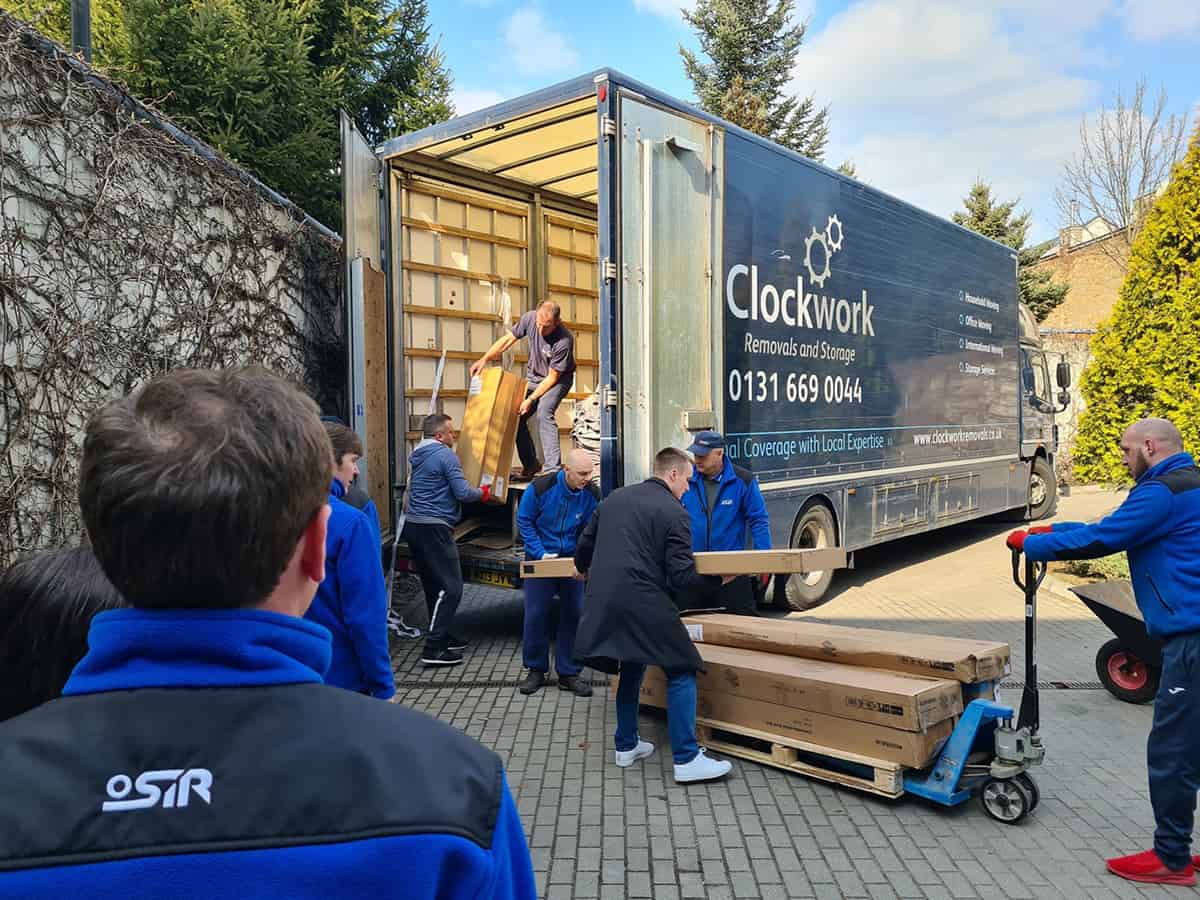 On the 14th March an 18.5-ton lorry set off from Clockwork Removals and Storage Perth branch laden with medical aid, bunk beds, mattresses and bedding to travel the 1,452 miles to Grodzisk Mazowiecki in Poland. Only 1 week before, Clockwork had been contacted by EastHORN Clinical Services to help fulfil a request by their Ukrainian colleagues to deliver 100 bunkbeds, mattresses and bedding to a repurposed warehouse in Poland to help house fleeing refugees from Ukraine. The great thing about this appeal was that it was in direct response to a very particular shopping list of aid which both EastHORN Clinical Services and Clockwork knew they were in the privileged position to make happen and ensure it got to the people who need it most through EastHORN’s staff and networks in Poland. Clockwork was pleased to be able lend a lorry, driver and logistical expertise to get this much needed aid to its destination.

Working with local schools in the Perthshire area and the community of Dunkeld and Birnam, drop off centers were designated and in no time at all incredibly generous donations were coming in thick and fast. With the help of the Strathallan School Community, the Clockwork lorry was loaded and given a very Scottish send-off by two pupils who piped the vehicle down the school drive at the start of its long journey to Grodzisk Mazowiecki.

4 days later the lorry arrived at its destination, where both Courtenay Morison, Chairman of Clockwork Removals and Storage and Iain Gordon, Executive Chairman of EastHORN Clinical Services were on hand with 15 other volunteers and the Town Mayor to unload. The mayor passed on his sincere thanks to all who supported and donated to the appeal. He explained how timely it was as they now have nearly two thousand refugees in their town with more arriving on a daily basis. Iain Gordon also thanked all involved and updated that his “Ukrainian colleagues remain, if not safe, at least well. Some have had to move with their families to Poland, but others remain and are using their medical skills to help as many of their compatriots as they can.”

Courtenay Morison said, “We were delighted to be able to help the Beds for Ukraine Appeal and help to make a difference to those displaced from their homes during this devastating invasion of Ukraine. I am so proud of our Perth branch, our driver Craig Richardson and thankful to everyone who donated beds and bedding, the hard work, support and generosity of everyone involved meant that we were able to deliver aid to those who needed it most.”

Paul Fox has collaborated with Guy Pinsent from Less Mess (which has a chain of facilities across Poland) to help refugees fleeing from the Ukraine. Along with the support of the BAR and the SSA, they have worked together with both charities and the Government to put a significant logistical effort together, allowing safe delivery of essential supplies for people who are in desperate need. Items such as clothing, bedding, food and medical supplies were donated by the public and generous local businesses. The items were then consolidated at Fox, My Lock Up (courtesy of Kevin Doyle) and Wigwam Self Storage facilities and prepared for onward transport to Poland. The urgency of the situation meant that this was all put together in just over two weeks. On the 21 of March, Fox’s newest road train, with a capacity of 3700cuft, was filled with over 1200 boxes of the supplies. On Monday 21 March, the vehicle set off on the long journey to Wroclaw, Poland, with senior Fox driver Kevin Watkins and Managing Director Paul Fox sharing the driving.

Due to the post Brexit customs requirement, the goods travelled initially to Fox’s trusted colleagues, Voerman International, in The Hague for clearance. After local customs officers had given their approval, they continued with their 1600km journey and arrived in Poland late on Tuesday evening. The following morning Paul, Kevin, Guy and a group of employees and volunteers unloaded the vehicle at Less Mess’ brand new facility for distribution to local charities, with some items going to those who have had to flee their homes and other supplies being transported across the border to Ukraine to help in conflict zones. 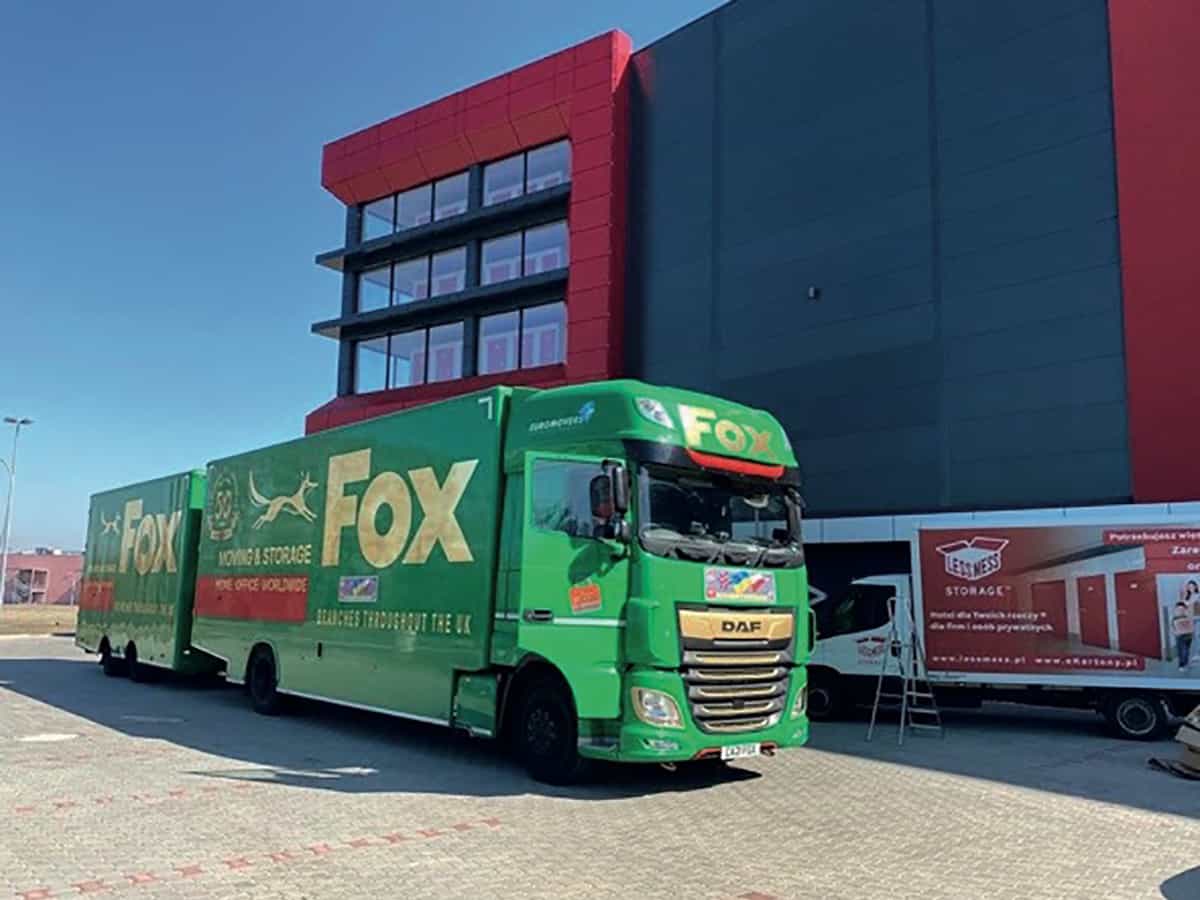 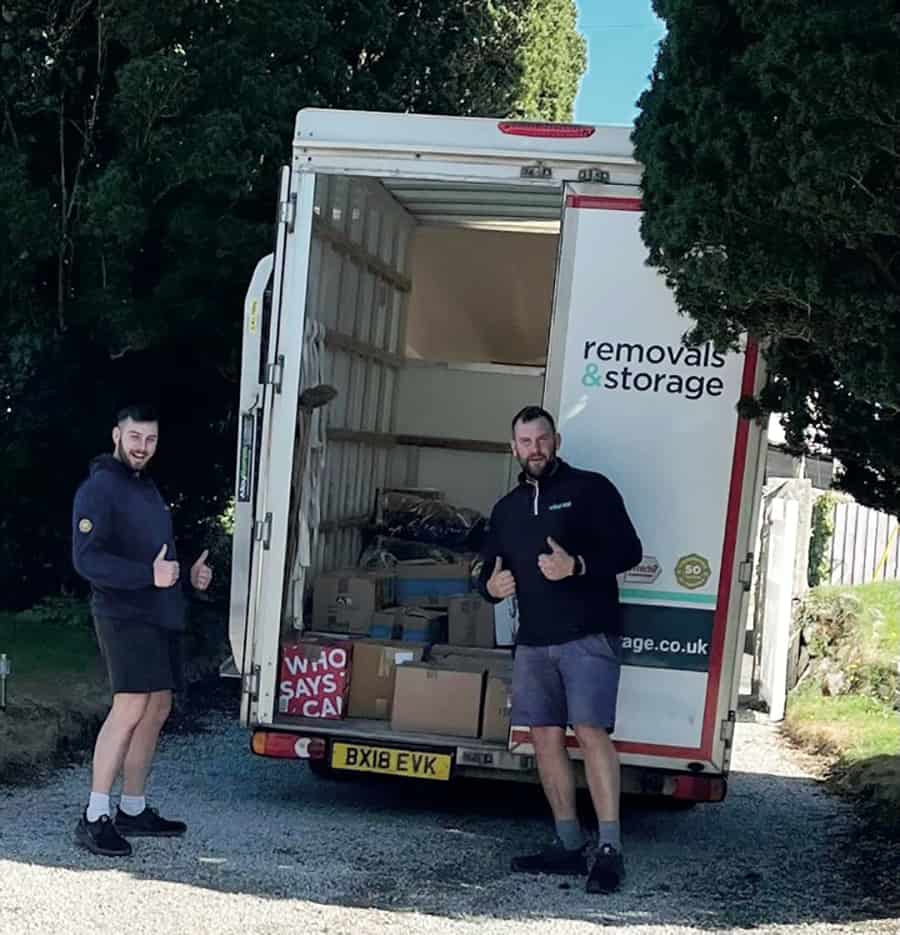 In Cornwall, Tripp Removals & Storage have provided logistical support to move donations for Ukrainian refugees. A local church, St Mylor, co-ordinated the collection, sorting and packing of aid supplies, all donated by the local community. Tripp then delivered the donations to a central collection point in Surrey to await transport by a charity to the Romanian/Ukraine border.

Simon Tripp, Operation Manager said, “We are fortunate to be able to provide practical assistance at this difficult time. As always, the generous people of Cornwall have stepped up to make a difference and we are delighted to be able to support this worthwhile cause.”

White & Co were aware that some of the Polish clubs in the UK were getting goods together to go to the Ukraine. On discovering that the cartons they were using were breaking easily and weren’t really fit for purpose, they decided to donate new cartons for them to pack in so that the goods could be delivered safely and in one piece.

They were then approached by a Polish lady called Monika who was working with the Salvation Army in Southampton. She was inundated with donations and asked White & Co to provide her with a quote to get them transported to Poland, as she needed to start a fund to pay for it as soon as possible. The company immediately decided to offer transportation free of charge.

A road train was made available which was soon filled and set off on 16 March. Louis Spies from White & Co said, “Firstly we were planning to deliver directly to Lublin in Poland where there is a large Red Cross distribution centre, but after exchanging emails with them it became clear that the goods would be better utilised in Szczecin, as many Ukrainian families were heading that way. We found a registered charity in the city who were very helpful when it came to clearing and then distributing the goods.” 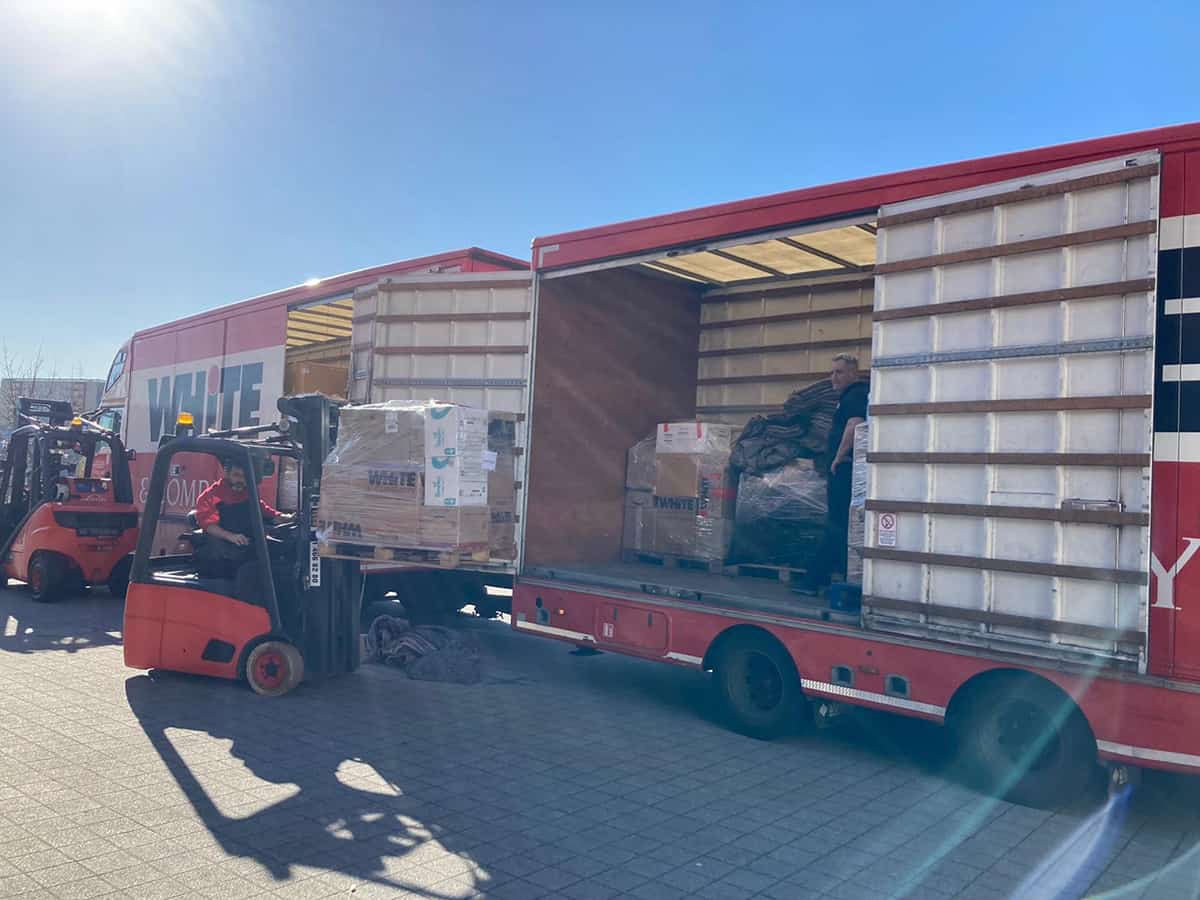