In Issue 42 of our client briefings we calculated the 22nd October as the date by which half of all sales agreed would not be completed in time to benefit from the stamp duty holiday. Our briefing left one question hanging uncomfortably in the air, namely “how many buyers will miss out on the stamp duty holiday?”

We knew we were leaving this question unresolved, principally because of the difficulties in accurately calculating a number with a range of assumptions that needed to be debated amongst our sector professionals prior to their application. This said, we did set our Data Scientists on the task for the past two weeks and we have dedicated this client briefing to the results of their analysis, exploring not only the quantity of buyers who will miss out, but their location and perhaps most importantly the cost to the economy that is likely to ensue.

In client briefing 42, we proved that Q3 2020 gave rise to a massive increase of 53% in Sales Agreed volumes, the like of which had not been seen in 2016 to 2019. We displayed this crucial information in the following chart. 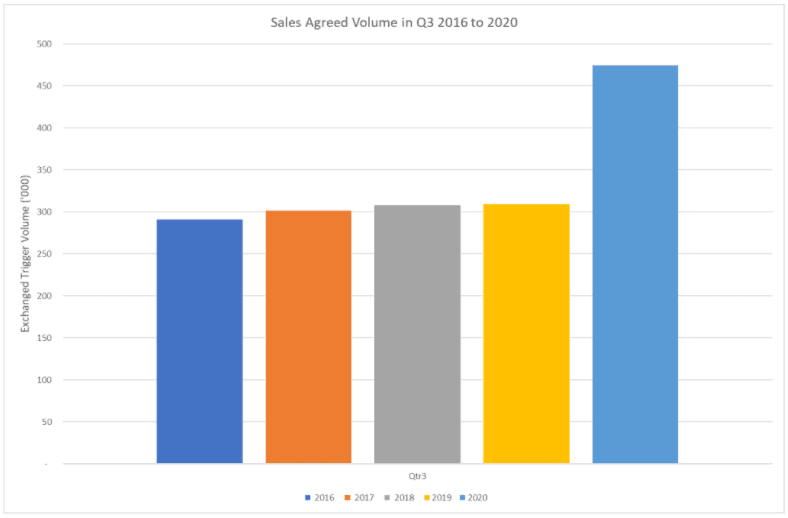 Further, we suggested that the property ecosystem of conveyancing, surveying, mortgage providers, local authority search providers and removers having seen four years at roughly the same sales agreed volumes would not be pre prepared for a staggering 53% increase in volume. With no significant time to scale, sales progression (the time lag between agreeing a sale and completing one) will slow dramatically.

If we assume that collectively, there is close to zero slack in these “sales progression industries” because the speed at which sales can progress is only as fast as the slowest part and more than 50% of transactions are linked in chains. Further, as sales volumes increase, progression times increase proportionally, but are normally distributed, we find the following key take outs from our calculations:

Much more importantly, 325,000 buyers with a Sale Agreed from September 2020 to January 2021 will potentially miss out on the Stamp Duty Holiday.

The picture across the UK is not a uniform one so we also calculated where in the country those that would miss out on the Stamp Duty holiday are located, which is expressed in the following regional breakdown… 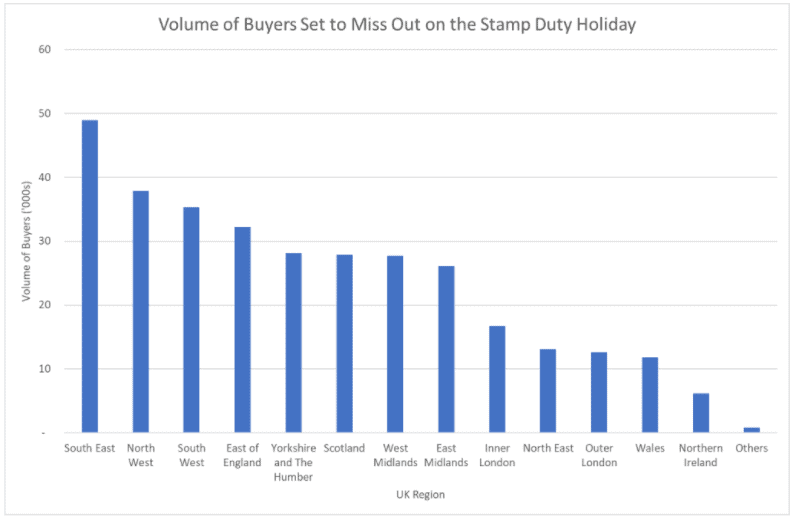 Most property commentators would expect that the buyers missing out would be strongly skewed towards the South, however from the above chart, we can see that 2 out of 5 of the regions are in the North. The Midlands is where you would expect it to be – in the middle – and London, Wales and Northern Ireland are less affected.

The Costs of Missing Out

Notwithstanding the political issue that this might cause with 325,000 disappointed people missing out on the stamp duty holiday, the real issue is the economic cost of the loss of these home moves. A home mover is the most valuable consumer on the planet from the period running up to their move and carrying on for many months post the move as they settle into their new home. They have a much greater propensity to purchase homewares, furniture, carpets and commence DIY projects than a non-moving consumer. This loss of 325,000 moves will have a significant dampening effect on local economies and could result in a loss of jobs in the retail and associated industries.

We have already established in prior client briefings that homemovers are worth around £50 billion to the UK economy each year (equating to c. 2.4% of GDP). Using the HMRC counts of property completions from 2019, this equates to around £42,500 per homemover.

We do not know how many of these 325,000 affected buyers will simply pull out of their property purchase because of the realisation that they will not benefit from the stamp duty holiday. Some buyers will have to pull out because they will not have the funds to pay stamp duty and then there’s the chain effect, where if a single buyer does pull out and they are in a 4 property chain, this breaks the chain for the other 3 purchases which are excluded from this analysis.

Considering this effect, we do not think it imprudent to consider the cost to the economy of an increase in the current fall through rates which already stand at an unacceptable 30%.

If our assumptions are correct the true effect on the wider economy on the additional non transactional spending would be a further £4 billion lost.

This will of course flow through to all UK regions. With much of the North West being a tier 3 lockdown area at present, with the local economy under pressure they could ill afford the shock of losing a further £0.5 billion from the loss of homemovers in their region.

The government has an opportunity to get ahead of this impending issue and review the stamp duty holiday and either announce an extension, amend the trigger date or taper off the closure date to avoid the “cliff edge” of 325,000 people missing out who currently believe they will still benefit.